If you wouldlike to help us, we would always appreciate a gift of artistic materials for our lessons (brushes, paints, aquarelle paper, little canvases, pencils, felt-tip pens, pastels, wax crayons etc.). We also invite volunteers to help our teachers during classes. 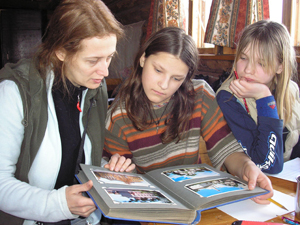 Painting big collective pictures is an amazing way to submerge children in the atmosphere of a fairy tale, and not only children, but everyone, it works even for grownups. A certain magic world is created where all the participants of this creation can feel good. We imagine the season and everything is actively discussed.

My favourite story is this. We decided to paint “The Land of My Favourite Wizards” where all the good magic folk live: the fairy from “Cinderella”, the Wonderful Wizard of Oz, Snow Maiden and Grandfather Frostamong others. And an argument started over what season it was going to be. Children started to argue. one said: “I love winter, because you can play snowballs and ride your sleigh”. The other says: “Oh, winter, it’s cold! Summer, only summer, swimming and diving”. The third one says: “And I love spring. Everything is changing, and this is the time when we are waiting for the summer”. No one chose autumn, by the way. For orphanage children autumn means returning to school after camp, so it’s nobody’s favourite. So we couldn’t agree on that one. So Nadia Varaskina, who was still small, but already diplomatic, said: “Listen, let’s not fight over it, let’s draw all the seasons on one picture. We have a painting about magicians – let it be magical”. So we had this winding path leading to a hill in the background, and the season would change: autumn – winter – spring – summer. And all the wizards found their places, the winter and the summer ones.

The first picture that kids came up with themselves was “The Toy Land”. Pasha said that he was dreaming of a big car with radio control. Girls were dreaming ofdolls – every child had their own wish. And they started thinking up houses for these toys. For example, there is a doll, who needs her own magic house. Well, this could be a mushroom-house or a house like a big berry, or an apple-house. My Asya was little back then, and someone decided to make an “Asya’s bottle”-house. So there was such a house – a bottle with a teat.

After the theme is dreamed up, each one starts drawing their own detail. I myself drew details for such paintings many times. First you take part in a kind of shared synthesis, in creating a new world. Then analytical work starts. This detail is yours only. How do you see it, what do you want from it, how should it look on its own. And then – there is synthesis again. Now this detail has to come back to this magical world and be connected to other details. It mustn’t be glued in separately, it has its own shadow, it starts to connect with other objects, they start to contact it. If it is a house, you can put a bench near it, you can a put a person at the door; someone would draw a cat in the window. 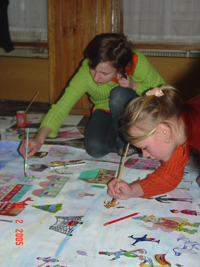 Windows are a whole other story. We open the windows, there’s light in them. We do it by inserting candy foliage, so that there is a kind of golden shine in the windows. And it makes children even closer to the idea that they could open a window like this from the inside if they started living in a house. Well, and the foliage doesn’t come out of nothing – first you have to eat the candy. We call this “candy tools” – we eat them for inspiration and for good mood, while the wrappers serve as vehicles for art.

Children have an interesting peculiarity: when they arrange the objects into the field of the picture, they put them in chessboard order, so that they don’t overlap each other That’s actually logical, because this way, from their point of view, the objects are best seen.

When all the details are ready, and we have to place them on the painting, we put them on the picture, and a kind of theatre starts – one of things and nature. I really like it that we can play with that. Trees can change places, houses are looking for their spot in the painting and that’s when the time comes to talk about perspective. What is closer to us is bigger, what is farther away is smaller; we contrast adult and child figures, how far they are from the forefront, we talk about different perspectives in general. Children have an interesting peculiarity: when they arrange the objects into the field of the picture, they put them in chessboard order, so that they don’t overlap each other (surpass?). That’s actually logical, because this way, from their point of view, the objects are best seen. Nevertheless, we discuss that the artist has to understand that objects can overlap. You don’t have to glue the tree above the house or under it, it can live by the house. We talk about the horizon, about how to combine the colors better, about contrasts and shades.

When we draw Moscow, I ask the children to pay attention to the forms of buildings, to architectural details. Kids walk around the street, but they don’t notice that at all. Here’s a typical example: a boy is drawing a wooden house. But one side of the roof is inclined, while the other is a vertical line. So you have to take a book or a box of paints: “Look how this line goes: if it was vertical, it would be a wall. This is a different plane”. Moreover, when we draw Moscow, village houses don’t suit us, so we go into the street and paint al fresco. Kids and I have often been to the square where Yuri Dolgoruki statue is and have drawn the details – how a window can be decorated, how new floors are built onto a building, how doors and roofs of such city buildings work. They never noticed any of this before, but now they start paying attention to some fences or porches. We would even do something like this – on our way to the metro station, I would ask the children: “Find a small architectural detail that we could add to our painting that no one has noticed yet”. That was back at Ostozhenka-street with the kids who are our oldest now. Someone added street-lights, someone – drain pipes; Sveta Khokhlova noticed that the sidewalk curbs can be colored black and white. She was so happy! It became her main theme. We immediately started painting black and white curbs on every picture, it was such an ornamental detail that added a lot to paintings, and Sveta was absolutely delighted! I think she still draws all the curbs this was. It was her own discovery: she noticed it herself! 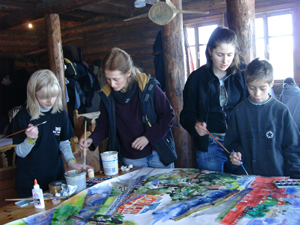 I love watching how the kids work in a group, how they learn to bargain and compromiseat the final stage, when the details have to be placed and glued onto the painting.

See, I’ve just drawn a house and I want it to be in the very centre of the painting, in the brightest spot! And here’s my house, please, put it here! And you have also drawn a house, and you also want to see it in the very centre. How can we arrange that? So we have a discussion: what will be better for the painting and not for our own dear selves? 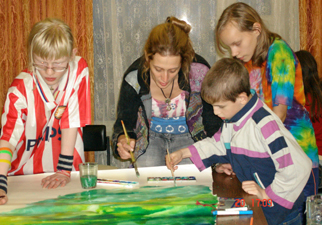 At the same time there are kids who still can’t draw anything but a small ladybug or a flower. So what if a person can’t draw? But they are in the group, in this team; they also want to make a contribution to this painting. So where do we put this ladybug so that it doesn’t get lost and becomes an extra eye-catching touch on the picture? I adore this process of collective creation!And every time children find a way to surprise me. 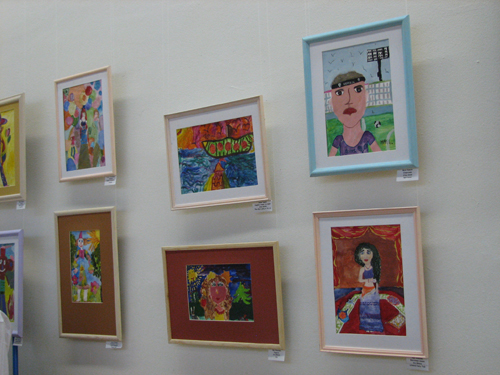 The most important thing for me is to awaken the children’s interest in art. As they don’t have the skills yet, the kids can’t express what they want. But when they acquire a certain set of techniques, when they develop a sense of color, children start to draw on their own and enjoy it. They come up with their own interesting ideas; their imagination is evolving. During the lessons children get to know new books, they ask about the unfamiliar trees and flowers from the illustrations. They learn to work together, to communicate and to arrange things between themselves when making collaborative pictures.

Children became really keen on drawing. As soon as they see paper, their eyes kindle, they imagine what they could draw. Their fantasy and imagination evolve.

They learnt a few techniques – some strokes, colourful daubs. Maria teaches them to observe. For example, at first children painted the sky just light blue. But now they see that there are different shades there, of pink and of blue. Their pictures became brighter, more varied, there’s nothing mundane in them. Compared to the children, who don’t attend the studio, I can see that these kids see art differently.

I always thought that an artist is a kind of a specially gifted person, someone extraordinary, but in the studio everybody paints. Kids work wonders. In November I saw one picture at the exhibition in the Central House of Artist (Centralny Dom Hudozhnika), and I thought: “Oh my God! This boy must have learnt from Malevich. He created such amazing geometrical forms! Everything is so bright, so well-put!” And this was just a kid, who went to the studio and drew. Here children’s artistic skills develop in an amazing way.

It is a marvelous idea for people to draw one picture together. Collective creation, when an art object is being born right in front of you: one person draws a castle, another – a person, the third one creates the background; it is a real man-made miracle, I have never come across anything alike before. 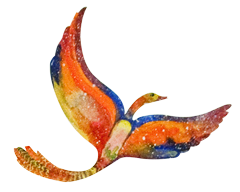