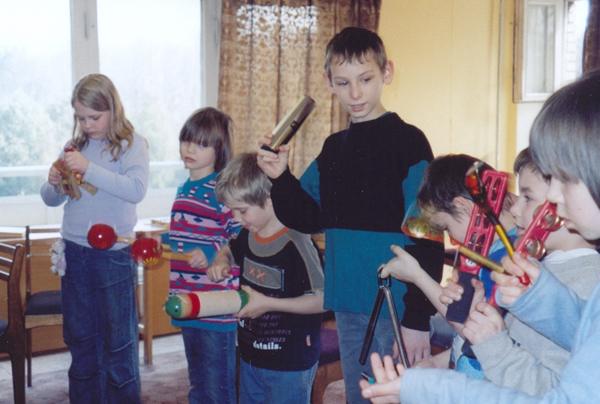 In April another two-day workshop took place. Together with the group from orphanage №80 we familiarized ourselves with some myths of ancient Greek, played a legend of a brave man Perseus, evil Medusa and beautiful Andromeda. We were swimming in the pool, playing football, practicing music with Vera Ivanovna and riding horses.

We started by finding Greece on the map. We learnt that ancient Greeks had had many gods and each one had been responsible for something. We played ancient pagans a little and thought up gods of Subsistence, Clothes, Fresh air and Hope.

We read a myth of Perseus; the children chose their roles, we rehearsed on Saturday in the morning and afternoon, and in the evening we gave a performance.

The weather on Sunday was sunny, and we spent almost the whole day outside. We rode horses andwere carried in carts. The children especially liked the horse Borya and the filly Figuristka, they eat out of children’s hands and Oksana said, that when she grows up, she definitely buys a horse. Members of the trip:

–All he needs is to eat, he licked my hands clear.

– I liked playing Perseus. Because he cut off Medusa’s head.

– I played Athena. It is a goddess. She gave Perseus the flying shoes. 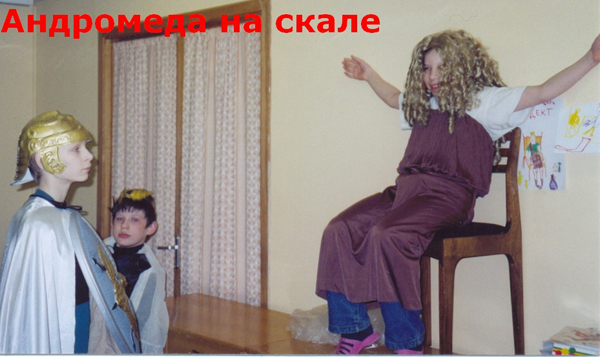 – I played Andromeda. She is a rock climber, because she can hang on rocks.

– Medusa is a witch, she looks beautiful but she is evil inside. Everyone who looked at her face turned into a stone. And Perseus cut her head off, because he was looking at the reflection in the shield.

– I played the king. He was sitting at the table and was drunk. I’m not sure about his character. Well, he was evil, trusted nobody and was a coward. 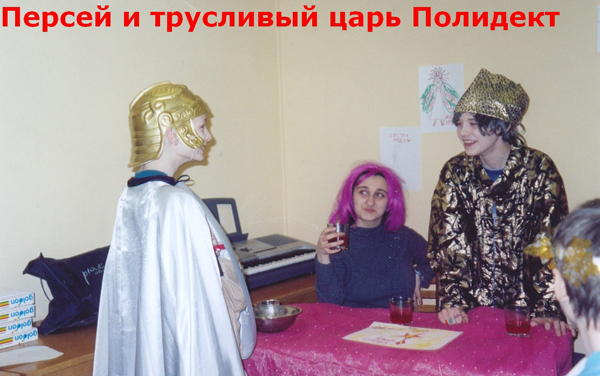 – I played a sea dragon. It is scary and mad. I tried to scare people, imagined I was scary. I crept towards people and then stopped. 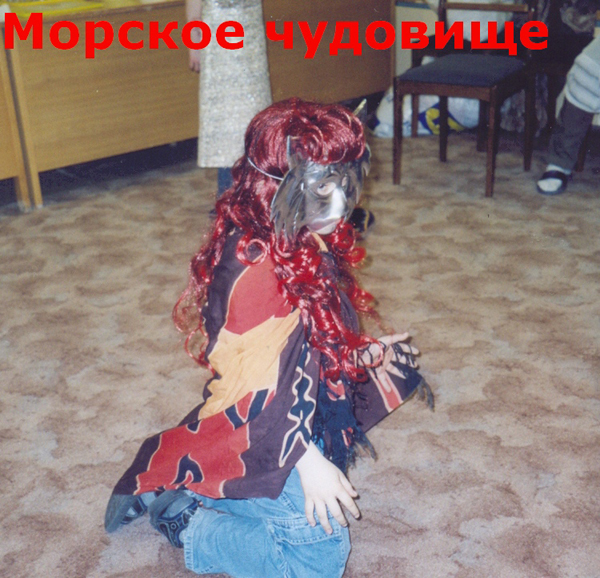 Myths are a very good material for children to enable them to describe their own fears.

Working with myths and fairytales is an opportunity to tell about your own fears, problems through the metaphorical plan, to experience what you are afraid of through the myth. Moreover, it is an opportunity to play gods, heroes, have power and feel responsibility. Of course it will not come immediately, but if you work with it constantly, your ideas about life changes, because when you are a god, you feel responsibility for someone.

Even in this myth of Perseus, the tsar Polydectes did not cope with his task, so to say. And Perseus decided to protect the people on his own. When children see how it happens and feel it, they do not want to be such Polydectes. The roles the children choose are not random.

The Medusa was played by Oksana, who is concerned about her appearance now, and the opportunity to play such a beauty, whose outward appearance destroys everything, who does not have spiritual beauty and have no kindness is very important. It is not even the play of a role that is significant, but the very moment of choosing, the reaction of other people, when she announces that she wants to play this role. She begins to bloom when it is accepted by the others, when she can really claim for the role of a beauty.

Seryozha played Perseus because he physically cannot come with other boys – they are stronger, and it is important to him that in this role he can be a hero who does not need to be very strong and muscular when he has a heart of a brave man. Physical strength is not that important, you can devote yourself to higher aims.

Speaking of the tsar – it is an amazing thing. According to all descriptions, the tsar is nothing like a hero, he is cowardly and greedy. But he has such a desire for power, irresponsible power. To be called tsar and do nothing. And it is extremely significant. Yes, I agree to be cowardly and greedy, but I will have all power attributes – a crown, golden clothes and a table with various dishes. And for now you cannot demand more, because this role is not complete yet, the boy has a very strong need for power. Moreover, this power is not a result of his own qualities. He is not even ready to realize that this is why the tsar dies. Perhaps, a game situation will help him to live this role as quick as possible and to want something more. 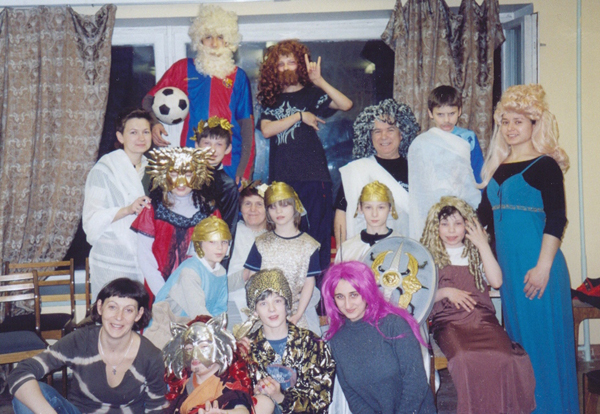 Liza was Andromeda. The opportunity to play a female role and a role of a beauty is a very serious victory, because she always competes with boys. And it is very unusual for her to emphasize that she is a beautiful girl that needs to be rescued in their presence. She is stronger than many boys. And when she plays this role of a helpless girl who waits for a saver, there is a serious work inside her. And the fact that she decides to give her hand to Perseus and to be called his wife – is also something she lacks in her life.

Katya had a small role, but it was important for her that she was a goddess that gives a magic thing. It is like a role of a fairy. And she appeared and disappeared beautifully. Katya was the only one who remembered the words and played without any help. Katya does not think she is strong physically, and this role where she can help a boy is a new experience for her.

Oleg played a fisherman. It was important to him that he played the key role, but he is always afraid of doing things. He got used to using his weakness, and a role with words is a big step for him. He wants something very hard, but is so afraid that he will not cope with it, that he does everything for it not to happen the right way. And here it somehow happened, and it is not clear what to do with it. And he immediately wants something more.

The seminar expenses were financed by UNICEF.