In the summer of 2000 we met a wonderful woman named Penny Goodman at a US exhibition of the works of our kids. She was an incredible person bright, cheerful, open to love. We didn’t know at first that she was seriously ill with cancer.

In the fall, Penny came to Russia to work as a volunteer at our centre. She had planned to spend at least a year with us but her condition became drastically worse and she was forced to return home after four months. She died soon after.

Penny Goodman was one of the most-goving people ever to come to our centre. She was and remains for us an example of resilience and love for life. Our friends in the United States set up a special fund in her memory, the proceeds of which allow us to invite an extra child to our summer camp every year. 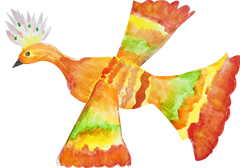